finally, we are inviting everyone to help us testing IPFire 2.19 – Core Update 115. It contains the long-awaited Captive Portal and brings various security and performance improvements as well as fixing security vulnerabilities.

This is a large Core Update with a huge number of changes and to support our efforts to develop new features and maintain the existing system as well as constantly improving it, we would like to ask you to donate. 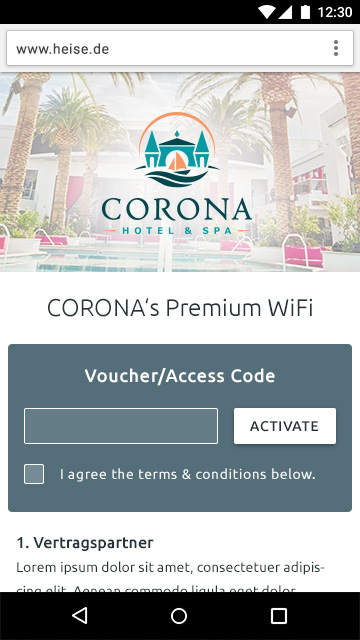 The new IPFire Captive Portal comes pre-installed on every IPFire system and allows easy access control for wireless and even wired networks. It is simple and very easy to set with only a few configuration options. That makes it versatile for many adminstrators and also very simple for all users.

It comes with two configuration modes: The default mode asks the user to accept terms and conditions. After doing so, access to the network is granted for a configurable time. After the time has expired, Internet access is blocked again immediately.

Optionally you can generate coupons that allow access for one device for a set time. Those coupons can also be exported as a PDF document and being printed so that they can be handed out easily at a hotel reception for example.

Although, Germany has just abolished the controversial law that made the subscriber of on Internet connection liable for everything anyone does over that connection (Störerhaftung), this is still a great feature for 2017 where WiFi networks in hotels, cafes and everywhere else are a must. It allows to only give access to the people who booked a room in your hotel, or bought a cup of coffee in your cafe. That will keep the WiFi from being overloaded and it will be fast for everyone.

The full documentation can be found on our wiki.

Thanks go to all the people of our community who have worked on this for a very long time.

The web user interface has been hardened by a series of patches from Peter Müller:

The OpenVPN project has deprecated some configuration options. This has been updated in IPFire as well which will now generate new configuration files when ever a new certificate has been issued. The old configuration files and certificates will remain but won’t be compatible with OpenVPN 2.5 any more. There is no need for action right now, but old connections might not work with clients that run a newer version of OpenVPN in the future. New connections will work fine with any recent and future version of OpenVPN.

Thanks for Erik for sending in a patch for this.

As always, we would like to ask all users to participate in testing which will highly improve the quality of this update.

Please report any bugs to our bug tracker and provide any feedback on our development mailing list.